September 15th, 2005. New York, New York.
Daily Mirror, London. Front page.
Days after the 9/11 attack on New York City my good friend Andy Lines, then the USA's Daily Mirror Bureau chief called me at 4am. 'Get up,' he demanded. 'I'll meet you outside your hotel in 20 minutes!' Andy had been able to track down Mike Kehoe. Kehoe had appeared on front pages around the world. He was the firefighter who had been photographed climbing the stairs of the World Trade center as everyone else was fleeing. It was assumed Mr Kehoe had been killed in the attack, even Tony Blair had offered his condolences for Kehoe in the British Houses of Parliament. Days later Andy discovered that Kehoe had managed to escape the building and survived through the brave actions of his unit and his commander who had pulled them out just as the building started to collapse. Then Mirror editor Piers Morgan phoned to ask if I had any images of Kehoe where he wasn't smiling? 'This is serious shit,' Morgan stated. I had to point out that Mr Kehoe is not so much smiling, more suffering from severe shock and the fact that his chief woke him up at 5am. I was able to get just 6 frames of Mr Kehoe before he had to ask if we could stop. 'Thanks,' he said, 'I'm no hero, many of my friends are dead. I'm just exhausted.' We thanked him and his colleagues for their bravery. His unit offered us a ride back to our hotels in their battered fire truck which was full of dust from the collapsed buildings with most of the glass smashed out. The interview and the photographs were a world exclusive for the Daily Mirror. As Andy and I left the fire station, the world's media descended upon the place. All further interviews and images were denied at that time.
Photo; Charlie Varley. 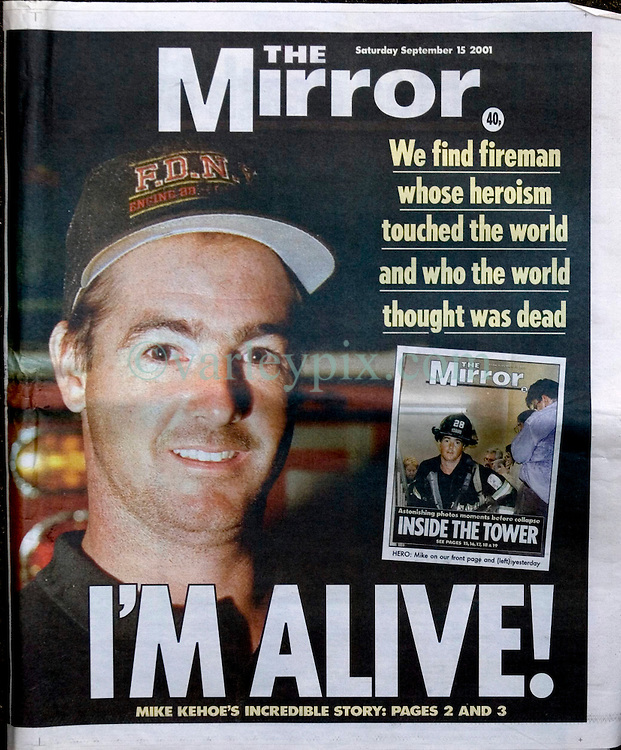